George Orwell on the metabolism of the industrial world

When discussing biophysical economics -- the idea that the human economy can be treated like any other biological organism that grows subject to resource constraints -- well-known names include Charlie Hall, Cutler Cleveland, and Robert Costanza. My personal favorite for the level of insight, using prose rather than math, is the work of Geerat Vermeij.

Recently, I've been reading George Orwell's 1937 book "Road to Wigham Pier", a testimony of the plight of the British working class. He captures similar themes, more eloquently, I think, than anything else I've read: 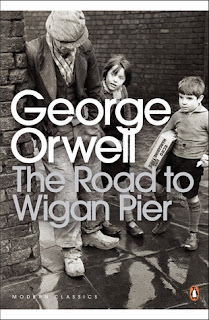 Our civilization...is founded on coal more completely than one realizes until one stops to think about it. The machines that keep us alive, and the machines that make machines, are all directly or indirectly dependent upon coal. In the metabolism of the Western world the coal-miner is second in importance only to the man who ploughs the soil. He is a sort of caryatid upon whose shoulders nearly everything that is not grimy is supported.

Watching coal-miners at work, you realize momentarily what different universes people inhabit. Down there where coal is dug is a sort of world apart which one can quite easily go through life without ever hearing about. Probably majority of people would even prefer not to hear about it. Yet it is the absolutely necessary counterpart of our world above. Practically everything we do, from eating an ice to crossing the Atlantic,and from baking a loaf to writing a novel, involves the use of coal, directly or indirectly. For all the arts of peace coal is needed; if war breaks out it is needed all the more. In time of revolution the miner must go on working or the revolution must stop, for revolution as much as reaction needs coal. Whatever may be happening on the surface, the hacking and shovelling have got to continue without a pause, or at any rate without pausing for more than a few weeks at the most. In order that Hitler may march the goose-step, that the Pope may denounce Bolshevism, that the cricket crowds may assemble at Lords, that the poets may scratch one another's backs, coal has got to be forthcoming. But on the whole we are not aware of it; we all know that we 'must have coal', but we seldom or never remember what coal-getting involves. Here am I sitting writing in front of my comfortable coal fire. It is April but I still need a fire. Once a fortnight the coal cart drives up to the door and men in leather jerkins carry the coal indoors in stout sacks smelling of tar and shoot it clanking into the coal-hole under the stairs. It is only very rarely, when I make a definite mental-effort, that I connect this coal with that far-off labour in the mines. It is just 'coal'--something that I have got to have; black stuff that arrives mysteriously from nowhere in particular, like manna except that you have to pay for it. You could quite easily drive a car right across the north of England and never once remember that hundreds of feet below the road you are on the miners are hacking at the coal. Yet in a sense it is the miners who are driving your car forward. Their lamp-lit world down there is as necessary to the daylight world above as the root is to the flower.

The full chapter, truly remarkable for its description of the work life of the miners, is here. 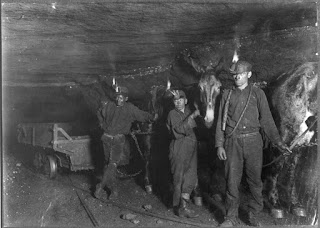 When I am digging trenches in my garden, if I shift two tons of earth during the afternoon, I feel that I have earned my tea. But earth is tractable stuff compared with coal, and I don't have to work kneeling down, a thousand feet underground, in suffocating heat and swallowing coal dust with every breath I take; nor do I have to walk a mile bent double before I begin. The miner's job would be as much beyond my power as it would be to perform on a flying trapeze or to win the Grand National. I am not a manual labourer and please God I never shall be one, but there are some kinds of manual work that I could do if I had to. At a pitch I could be a tolerable road-sweeper or an inefficient gardener or even a tenth-rate farm hand. But by no conceivable amount of effort or training could I become a coal-miner, the work would kill me in a few weeks.
Posted by Nephologue at 9:09 AM 1 comment:

Are renewables our salvation?

A past article in the New York Times by climate and energy writer Brad Plumer cast a ray of hope on the shadow that was cast by Donald Trump's decision that the United States should exit the Paris Climate Accord. Independent of government mandates, private companies are spontaneously moving into the renewables business. "Last year in the United States, 19 large corporations announced deals with energy providers to build 2.78 gigawatts worth of wind and solar generating capacity, equal to one-sixth of all of the renewable capacity added nationwide in 2017"

Hurray for capitalism! Climate's curse may be yet be it's salvation! Solar and wind may have the issue of being either expensive or intermittent. But production prices keep falling, and with a continental sized electrical grid, it’s probably sufficiently windy or sunny somewhere. Remarkably, solar and wind seem to be succeeding.

There a couple of considerations in this discussion that I don't see frequently addressed and I think may be really important. First, new sources of energy have historically added to past sources rather than replaced them. Second, any source of energy, whatever its source, enables civilization to further destroy its environment through the extraction of matter.

Consider the figure above, which provides a broad brush view of energy consumption in the United States over the past couple of hundred years. Overall, total energy consumption has risen dramatically. With the establishment of European settlers, society was first powered off wood, adding coal to the mix around 1880, with non-solid fossil sources taking off around 1950. Nuclear and renewables have (so far) been smaller players.

There’s a couple of interesting things to notice about these curves. First is their shape: following an initial period of exponential growth, each source tends to plateau. Then, when new sources are added,  they are additive: previously dominant sources do not decline, or at least not by much -- they simply become part of a larger mix. The curve for coal is particularly interesting. While there was marginal decline between 1910 and 1950, since then consumption of coal appears to have been resuscitated by oil and natural gas. Fluid fuels didn’t replace coal. In fact it was quite the opposite!

Why would this be? I think a case could be made that what is going on is that new energy sources grow civilization, thereby increasing all of its aspects, including population, vehicles, and homes, as well as their corresponding demand for all types of energy, irrespective of source. Energy supports the technological advances that make previously inaccessible sources of energy more accessible.  With the introduction of oil, mechanized digging of coal gets easier; with an explosion of human population aided by the fertilizer produced with oil, demand for electricity produced by coal increases too.

There are many physical analogs for this sort of behavior. To use the language of physics, we could think of an energy type as a “degree of freedom”. In low energy systems, certain possible degrees of freedom may be “frozen out”, and be inactive. With increasing energy added to the system, these degrees of freedom become active, but not at the sacrifice of those degrees of freedom that were previously active at lower energies.

So renewables are great as a substitute fuel for the purposes of slowing climate change, provided they actually replace rather than add to existing sources of energy. Unfortunately, it is not clear that there is any precedent for this sort of thing happening.

A second issue is that civilization is made of matter not energy. As civilization grows, it accelerates its rate of pollution as it goes. Acting as an open thermodynamic system, we use energy to extract raw materials from our environment in order to feed and grow our children, construct the stuff of civilization, and offset ever present decay. As we do so, resource extraction depletes the oceans of fish, the forests of trees, and the ground of minerals, leaving behind material waste products such as plastic, nitrogen, and exotic chemicals that pollute our land, water and air.

How can it be that renewables are any sort of environmental panacea if they simply add to the energy mix that we use to extract raw materials from our environment and leave behind an ever growing pile of waste?

Whether the energy source is oil or solar doesn’t really matter. Energy of whatever stripe is used to acquire the raw materials from our environment, the components of all the stuff of humanity, building more of us while leaving less of the environment in its wake. Sure, maybe renewables do not leave behind carbon dioxide in quite the same way as fossil fuels, but the energy they do provide helps contribute to our seemingly unstoppable conversion of matter from the environment into the matter that composes civilization.

So, even if sunlight and wind is seemingly infinite, our planet Earth is not. Any short-term material gain of ours is a loss for the world around us. Renewables only accelerate this process.