Can we use physics to forecast long run global economic growth?


One of the more challenging problems in physics is the evolution of complex systems. Atmospheric scientists study phenomena ranging in scale from those of molecules to the size of the planet, and struggle with integrating the full gamut of interacting forces into a usefully comprehensive whole.

The world’s economy could easily be another example. Individual actions have become intertwined with markets, supply chains, and global trade agreements. Economic forces seem uniquely human, subject to the vagaries of consumer choices and the whims of political and business leaders, almost impossible to predict with any degree of accuracy.

Yet, humanity is undeniably part of the physical universe. An immense body of work in the social sciences demonstrates that - taken in aggregate - we collectively exhibit the same mathematical characteristics seen in many well-established physical phenomena, such as power-laws for our musical compositions, writing, or income distributions, and negative exponentials (or Boltzmann distributions) for the proximity and number in our social circles.

Perhaps, well-established tools from physics can also be used to help address questions about where the economy is headed. Forecasting is well-developed in the geosciences for prediction of such complex phenomena as earthquakes, the wind, and tides. Can similar tools be used to help determine our financial future?

To be sure, this line of thought is not exactly new. Practitioners of a sub-field called econophysics  invoke physical analogs to explain market movements.

My own approach is rather different. Like many physicists, I believe a first approach to any complex problem is to step back as far as possible, to constrain the big picture first before getting bogged down in any details. 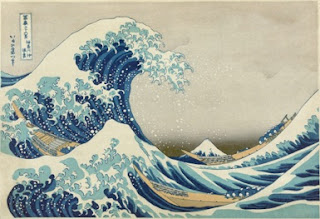 Or, consider this beautiful woodcut. We might ask ourselves which way is the boat in the foreground going? Up, down, or staying still? To me, Hokusai conveys the artistic sense that the oarsmen in the foreground are moving upward towards the crest of a wave.

Maybe you see something different. And more scientifically, we cannot know:  all we see is a snapshot in time. Without additional information, assuming the boat stays in roughly the same place would be as safe a guess as any.


This "stationarity" is what we might call "Persistence", or steady-state in the "zeroth" moment. Naturally, we'd hope to do better by going to higher order moments. If we could, we might ask the artist in his grave where the boat was just a few moments earlier. Then we might sensibly suppose that the boat will continue its upward or downward trend.

As a means for making a forecast of the boat’s position, we might call this technique “Persistence in Trends” or steady-state in the first moment. We could feel confident that such a forecast would do better than assuming a model of mere “Persistence” that does not consider that the boats moves at all.

And more sensibly, we know that the boat cannot continue moving up or down indefinitely. To account for this, we would try to go further to the second or even higher moments. For this we might look at other waves for a guide or use a model of the fluid mechanics of an ocean wave to predict how far and fast a wave rises before it falls or breaks.

My contention is that we can do something similar with long-term predictions of the global economy, by using thermodynamically-based expressions for how economic systems respond to external forces such as resource discovery and depletion to offer robust, physically-constrained economic forecasts.

It can be (has been) argued that it's pretty arrogant - even nuts - to imagine that something so complicated as humanity is predictable. But in its defense, using physics simplifies the economics problem to a level that any theory can at least be tested.

One way to test any prognostic model framework is to perform what in meteorological forecasting is called “hindcasting” : How well can a deterministic model predict present conditions initialized with the conditions observed at some point in the past? Model accuracy is evaluated using a “Skill Score”, which expresses how well the model hindcast reproduces current conditions relative to some Reference Model that requires zero skill.

Hindcasts of civilization growth
I have applied these techniques to evaluate the predictive skill of a new economic growth model for the long-run evolution of civilization. This model approaches the global economy rather like an organism. Civilization's growth rate is determined by its past well-being, environmental predation, whether it eats all its food, and whether it is able to move on to discover new food sources. 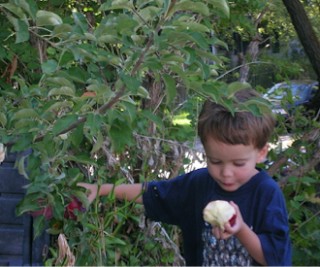 For civilization, food is things like oil and iron. We use the energy in oil to incorporate iron into our structure just as people use carbs, protein and fat to turn bread into flesh. Civilization depletes reserves at the same time it uses them, to discover and grow into new reservoirs - provided the remain. Our ability to discover and exploit new reservoirs might easily be impeded by natural disasters, such as those we might experience from climate change.

A model based on these concepts provides deterministic expressions for civilization’s rates of economic growth and energy consumption. Input parameters are the current rate of growth of global energy consumption and wealth  and a rate of technological change that can be derived from, among other things, past observations of inflation and raw material consumption. Output parameters include the rate of return on wealth and primary energy consumption, how fast this rate is growing (or what is termed the “innovation rate”), and the world GDP growth rate (or GWP).

As shown in the figure above, a first principles physics-based model initialized in 1960, based only on observations available in the 1950s, does remarkably well at hindcasting evolution of energy consumption and GDP growth through the present. For example, average rates of energy consumption growth in the past decade would have been forecast to be 2.3 % per year relative to an observed average rate of 2.4 % per year. Relative to a persistence prediction of 1.0% per year observed in the 1950s, the Skill Score is 96%.

No other economic model I am aware of is capable of such accuracy, at least not without cheating by tuning the model to data between 1960 and 2010. How is it then that a physics-based economic model does so well at predicting the present based only on conditions 50 years ago? 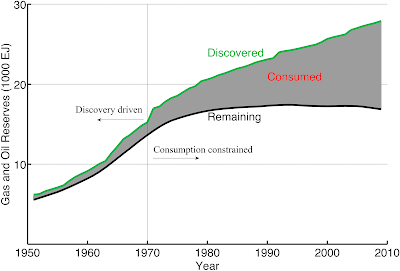 Well, the obvious answer might be that humanity acts as a physical system and the model at least has the correct physics. But it helps too that the model was initialized in the mid-twentieth century when civilization was responding to an exceptionally strong impulse of fossil fuel discovery. The figure above uses the IHS PEPS data base to show that between 1950 and 1970, remaining global reserves of oil and natural gas doubled because discoveries outpaced depletion. Since, discovery and depletion have been in approximate balance; remaining reserves have been more or less stable. 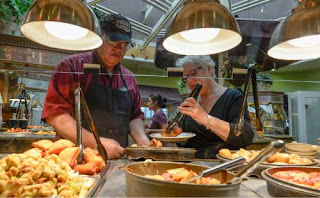 It is as if civilization suddenly found itself in 1950 at an enormous restaurant buffet. Each time it visited the table it discovered new plates of delicious energy to consume, and its appetite increased apace. At some point around 1970, however, its appetite increased to the point that it discovered new food not much faster than it consumed the food that was already there. The amount of known food on the table stayed stable.

For civilization, uncovering a new energy buffet was far more innovative than merely going back to the table, and it had a correspondingly large and lasting impact on economic growth.

There was a remarkable fossil fuel discovery event between 1950 to 1970 period, and what followed was a clear physical response to this strong prior forcing. Forecasting the future should also be possible, but it will probably be more of a challenge than hindcasting the past 50 years...unless, once again there is a new wave of massive energy reserve discovery, possibly associated with renewables. If discovery once again outpaces growing demand, it might propel civilization to a renewed phase of accelerated innovation and growth. Then, I anticipate that our future trajectory will once gain be amenable to deterministic forecasts using economic equations based on physics.