A Power Theory of Value?

Economic wealth or capital is not a static quantity that simply exists. Rather it requires continual energy consumption for its sustenance. Civilization is like a living organism, or as Nate Hagens puts it, a super-organism. Energy is required not just to grow civilization but also to maintain its current size.

Sure, civilization is complicated. Valuing any given component of civilization is something all of us try really hard to do with varying degrees of success (myself, I'm a terrible investor). But, as philosophers have recognized for hundreds of years, all components of civilization, whether human or physical, have no innate value in and of themselves; value can only be acquired through connections and the judgement of others, nothing intrinsic to the item or person in question.

As John Donne put it: "No man is an island, Entire of itself. Each is a piece of the continent, A part of the main...” An ounce of gold has no intrinsic worth, but only acquires value by acting as a useful part of society, through banking system networks maintained by the accumulated knowledge capital of bankers, all of which require primary energy to be sustained, either by feeding the bankers or by powering electronic transactions. An ounce of gold left abandoned and forgotten in the middle of the desert is worthless until it is found.

Looking at civilization as a whole we might surmise that, like a living organism, the internal transportation, communication, and human physiological networks that define what we think of as humanity require a continual consumption of energy. Otherwise they wither and die, becoming totally valueless. We're not much use at work if we stop eating. A road never traveled serves little purpose. We can hypothesize that economic value and energy consumption are linked. 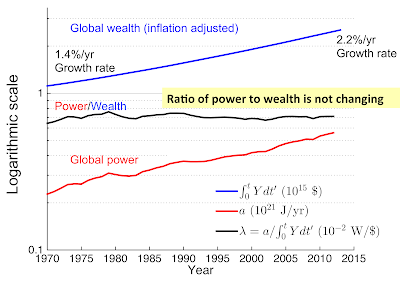 This suggests a "Power Theory of Value", that energy consumption and economic wealth are tied by a constant. Importantly, this is a falsifiable hypothesis. And, as shown above, it seems to be borne out by the data. Summing wealth over all the world’s nations, 7.1 Watts is required to maintain every one thousand inflation-adjusted 2005 dollars of historically accumulated economic production.

A lot of people get confused about this relationship though: to be clear, it is not about energy and yearly economic output or GDP. Plenty of people find a correlation there, but the ratio between the two has been increasing with time. The intercept is not zero.

Nor does the relationship refer to the more restrictive view of wealth as physical capital that can be found in traditional economic models. Instead, the constant relates current energy consumption to the summation of production, not just over one year -- the quantity called GDP -- but over all of time, what I refer to as Global Wealth.

Adjusting for inflation is key, in these calculations. Then, as shown in the figure above, this highly aggregated Wealth has a fixed relationship to current energy consumption, independent of the year that is considered. As of 2010, civilization was powered by about 17 trillion Watts of power. This energy consumption supported about 2352 trillion dollars of collective global wealth. In 1970,  civilization was younger and smaller. Both quantities were less than half as large (in fact, GDP was less than a third current values). In the interim, energy consumption and wealth grew in tandem, even at variable rates that increased slowly from 1.4% per year to 2.2% per year. At all times, the constant of proportionality stayed effectively the same, with a standard deviation of only 3%.

If one really wants to relate energy to GDP, then from the perspective above, the correct relationship is to consider year-to-year changes, that is the relationship between global GDP and the annual increase in global power capacity. Then, on average, adding every extra exajoule of global consumption capacity in a year enables 89 billion of year 2005 trillion USD of GDP. Variability is higher, but nonetheless the relationship is more or less fixed.

Why does this matter? Constants of proportionality are what provide a foundation for linking what initially seem to be two independent quantities (e.g. energy and frequency in quantum mechanics or energy and rest mass in relativity). Constants form the basis for all that follows. All other physical results are just math.

The constant of proportionality λ that relates civilization’s economic wealth to its rate of energy consumption has the potential to tell us not just where we are today but to dramatically simplify and constrain long-term estimates of where the global economy is headed. The constant ties economics to physics, so with physics, more robust economic forecasts become possible.

Posted by Nephologue at 2:04 PM