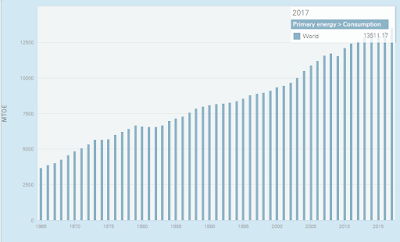 British Petroleum provides some pretty nice tools for visualizing energy consumption like the figure above which drives home effectively the point of just how fast our demand for energy is growing, roughly quadrupling in the past 50 odd years.

In order to understand this growth better, I think it's important to ask why we need energy in the first place. This may seem like a pretty bone-headed question -- of course we need energy. But energy is not an essential ingredient in traditional macro-economic models. In the best case energy is treated as a quantity that can be "substituted" for other ingredients of the global economy as capital and labor.

As a physicist, this seems totally nuts as our individual ability to work rests on the availability of energy. We're not somehow divorced from the laws of the universe. I've never heard of someone being an effective element of the labor force who had completely ceased to eat. And food sure doesn't materialize without work being done.

Instead, I think it's appropriate to treat civilization as a what can be termed a thermodynamic heat engine. The idea of a heat engine was first envisioned by French engineers in the early 1800s. In a car, work is done to propel a car forward by consuming the chemical energy in gasoline at high temperatures and dissipating it as waste heat at low temperatures with the pistons moving up and down in between.

In one way, we're very similar. We consume energy to go through the cyclic motions of going to and from work and the grocery store, sending out internet search requests, and pumping our hearts. All these actions require a temperature gradient where energy is released at high temperatures and dissipate at cold temperatures, whether with our cars, our computers, or the gradient from the inside to exteriors of our bodies. In fact, we can see all of human civilization as a "super-organism" that consumes primary energy to engage in all of its internal circulations, ultimately radiating waste heat to the atmosphere and then to cool of space.

High potential primary energy resources like oil and coal sustain civilization’s circulations against dissipation of waste heat. ‘Useless’ energy ultimately flows to space through the cold planetary blackbody temperature of 255 K. In between lies civilization, including people, their activities, and
all their associated circulations, whether or not they are part of the GDP.

A key difference between human civilization and a car is that it can grow. By growing, its thermodynamic engine expands. A larger engine consumes more, dissipates more, and does work ever faster. This positive feedback provides a recipe for exponential growth.

We’re actually pretty familiar with this. If we eat too much we get fat. I’m told that consuming an extra 3500 calories beyond what we need leads to a pound of weight gain. This is the energy required for the body to turn food into flesh.

A child consumes food today in some proportion to the child’s body mass. The child experiences a production of mass if there is a convergence of energetic flows such that it dissipates less heat than is contained in the food energy eaten. The child’s current size is directly a consequence of an accumulation of prior mass production. Its current rate of food consumption is also a consequence of prior production. As the child grows it eats more. As the child approaches adulthood, the disequilibrium between consumption and dissipation narrows, and (hopefully!) the production of new mass stalls.

So economic production, or the GDP, can be seen as the consequence of this imbalance: production is positive only when primary energy consumption is greater than the rate at which civilization dissipates energy due to all it’s internal circulations. If production is positive, civilization is able to incorporate raw materials into its structure. It grows, and then uses the added population and infrastructure created with the materials to consume even more energy.

I think this is what is happening with the BP statistics. Because the GWP exists, we grow, and then use our growth to access more energy which we can then consume with the higher infrastructure demands. The relevant equation is that every 1000 dollars of year 2005 inflation-adjusted gross world product requires 7.1 additional Watts of power capacity to be added, independent of the year that is considered.

Posted by Nephologue at 9:45 AM